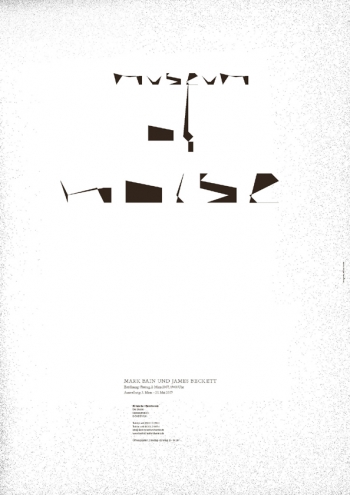 Museum of Noise, announcement for the exhibition at the Kölnischer Kunstverein 2007

As the new directors of the Kölnischer Kunstverein, Kathrin Jentjens and Anja Nathan-Dorn will be launching their programme with two young artists who are on the cusp between concept art, sound art and experimental music.

In his installations, Mark Bain (born 1966, Seattle, USA) presents the self-oscillation of matter, particularly that found in architecture. By amplifying the seismographic oscillations of the ground or architecture either acoustically or using vibrators, he ultimately liberates the perception of space from the dominant form, namely observation. The viewing distance we have when looking at something is lost as a result of the physical or acoustic experience of architecture. Bain’s portrayals create an apparent contradiction – particularly through the material structures of our society – by dematerialising these by converting them into motion, sound and vibration. By presenting the machines used as minimal objects, he shifts the view from the world of products, which was so important for pop and concept art, to industrial devices, which dominate our everyday lives in a much more structural manner. With his work – which attacks, or topically addresses, architecture – and using industrial machines, he has already made himself a name internationally in the area of media art.

James Beckett’s (born 1977, Harare, Zimbabwe) interest in sound developed from an initially more installation-oriented work and led him towards radio documentaries and working with museal displays. Of special importance within this context is the A Partial Museum of Noise project, which will also be on display at the Kölnischer Kunstverein. It documents the cultural and physiological effects of various forms of „noise“. The Industrial Revolution also plays an important role in his artistic research. The invention of synthetic dyes and its link to BASF, for example, or the cultural implications of vacuum cleaner tubes for the Dutch concern, Philips. When he tells these stories, which also question customary artistic media, such as colour and images, based on the representation of the personal sphere of experience, he strips them of their power over our everyday lives. In other works as well, Beckett transforms scientific standards and units of measurement and order into aesthetic ones and questions their indisputability in doing so.

Bain and Beckett are characterised by an experimental approach to new technologies and media as well as a sensitive examination of specific places. For the exhibition at Die Brücke, both artists have developed works that deal with Wilhelm Riphahn’s building, which will also be an important starting point for our programme in the future. To this end, Beckett will duplicate architectural models of the Cologne-based architect, who deals with the vocabulary of modernism as if it were Lego. Mark Bain will amplify the character of the exhibition space as a display cabinet for the city by making the vibrations of the window glass audible. In doing so, he will transmit sounds from the inside to the outside and vice-versa. Also on display will be Partial Museum of Noise by James Beckett and a new version of the Feed carnivore video work by Mark Bain, which works with a fear-provoking super-positioning of television images. With their work, both artists question the principles of social organisation in terms of traffic, industrialisation, engineering and mass media. To this end, they touch on central topics for the future development of western democracies, which will also play an important role in our curatorial programme.