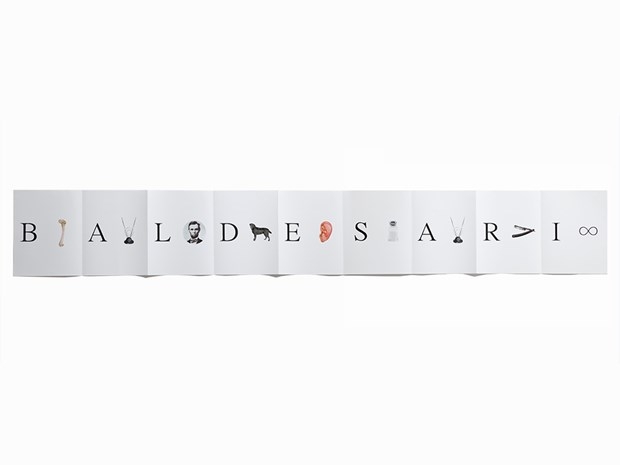 The relationship between speaking and showing, language and image is the object of investigation in John Baldessari’s artistic work. After turning away from painting around 1970, he began working primarily with visual material and texts from the mass media. His style is characterized by the superimposition of photographs and painted surfaces, whereby he removes pictures from their original context and processes them by overpainting, retouching, contrasting and cutting. In unique pieces, prints, artist’s books, videos, films, billboards and public works, he deals with pop culture in an ironic and playful way. Baldessari has significantly influenced generations of artists.

His ten-part leporello, available through the Kölnischer Kunstverein, shows the artist’s surname, with each letter followed by an illustration of an object or person (Bone, Antenna, Lincoln, Dog, etc.) that bears the same initial letter—a typographical representation familiar from children’s books for learning the alphabet. It is one of his thousands of works which demonstrate—and, in many cases, combine—the narrative potential of images and the associative power of language within the boundaries of the work of art.

John Baldessari (*1931 in National City, California, died 2020 in Venice, California) was an American conceptual artist known for his work featuring found photography and appropriated images. Initially a painter, Baldessari began to incorporate texts and photography into his canvases in the mid-1960s. In 1970 he began working in printmaking, film, video, installation, sculpture and photography. He taught at the California Institute of the Arts in Valencia, CA from 1970-1988 and UCLA 1996-2007. Baldessari’s artwork has been featured in more than 300 solo exhibitions and in over 1000 group exhibitions in the U.S. and Europe. His projects include unique works, prints, artist books, videos, films, billboards and public works. Major retrospectives and solo exhibitions have been shown recently at Museo Jumex, Mexico City (2017), Städel Museum, Frankfurt am Main (2015), and as touring exhibition at Tate Modern, London, MACBA, Barcelona, LACMA, Los Angeles, and Metropolitan Museum of Art, New York (all 2010/2011).