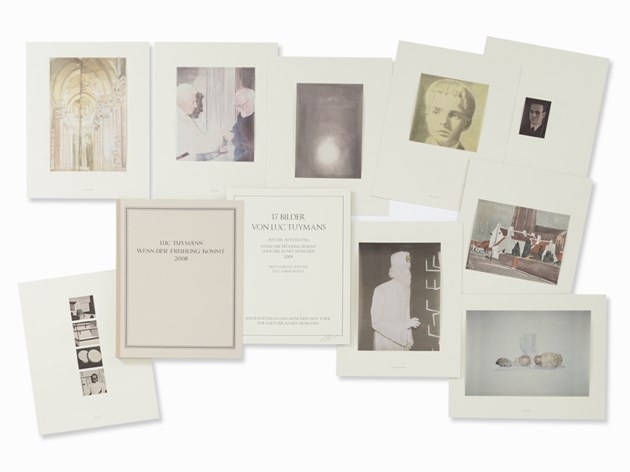 The work of Luc Tuymans, who donated the Vereinsgabe for the Kölnischer Kunstverein in 2017, came into the focus of the international art scene at the beginning of the 1990s, when the genre of painting seemed to have little relevance. He himself describes his mostly small-format paintings, which are based on film and photography techniques and are characterized by a reduced color palette, so that the motifs appear as if they had been washed out or faded, as “immaterial images”. The reduction, unobtrusiveness, and stillness of the works are often in contrast to the drastic and vehemence of the themes depicted, which are historical as well as social events, processes, and phenomena, such as the Holocaust, colonial politics in Belgian Congo, and September 11, 2001. Violence and silence are the determining supposed antonyms. Tuyman’s drawings and paintings arise from precise observations of manifestations of horror or trivial moments of everyday life, which carry within them the motif of the uncanny and sublime.

The annual edition for the Kölnischer Kunstverein was published in 2007 as part of Luc Tuyman’s exhibition at the Haus der Kunst in Munich. In his examination of the National Socialist history of the exhibition venue, the artist came across art portfolios from 1943 in today’s historical archives. They contain: high-quality color reproductions of paintings and sculptures from the “Great German Art Exhibitions”, which are ideology conform and considered “species pure”, selected by Adolf Hitler’s personal photographer Heinrich Hoffmann and distributed as propaganda material. They show peasant idyll, picturesque landscapes, nudes and heroic war scenes. Tuyman transferred the concept of the portfolio and imitated its graphic design. The preoccupation with National Socialism and the examination of structures of power, abuse of power and the power of images are central to his work.

Luc Tuymans‘ (*1958 in Mortsel, Belgium, lives in Antwerp) work has been honored over the past fifteen years in both Europe and America within the framework of comprehensive solo exhibitions and retrospectives, most recently Palazzo Grassi, Venice, De Pont Museum, Tilburg (both 2019), Reset Gert Robijns, Borgloon (2017), Museum aan de Stroom (MAS), Antwerp, National Portrait Gallery, London, Lille Métropole, musée d’art moderne, d’art contemporain et d’art brut, Villeneuve d’Ascq as well as the 9th Biennale de Montréal (all 2016). In 2015, a major survey of Tuymans’s work was presented at the Qatar Museums Gallery Al Riwaq in Doha. Moreover, previous major survey shows of the artist’s work include those organized by Wiels Centre d’Art Contemporain, Brussels in 2009 (traveled to Baibakov art projects, Moscow, followed by Moderna Museet, Malmö, Sweden) and Tate Modern, London in 2004 (traveled to K21 Kunstsammlung Nordrhein-Westfalen, Düsseldorf). Tuymans has already participated twice in the Documenta in Kassel (1992 and 2002) and represented Belgium at the Venice Biennale (2001). His works are part of important museum collections worldwide.