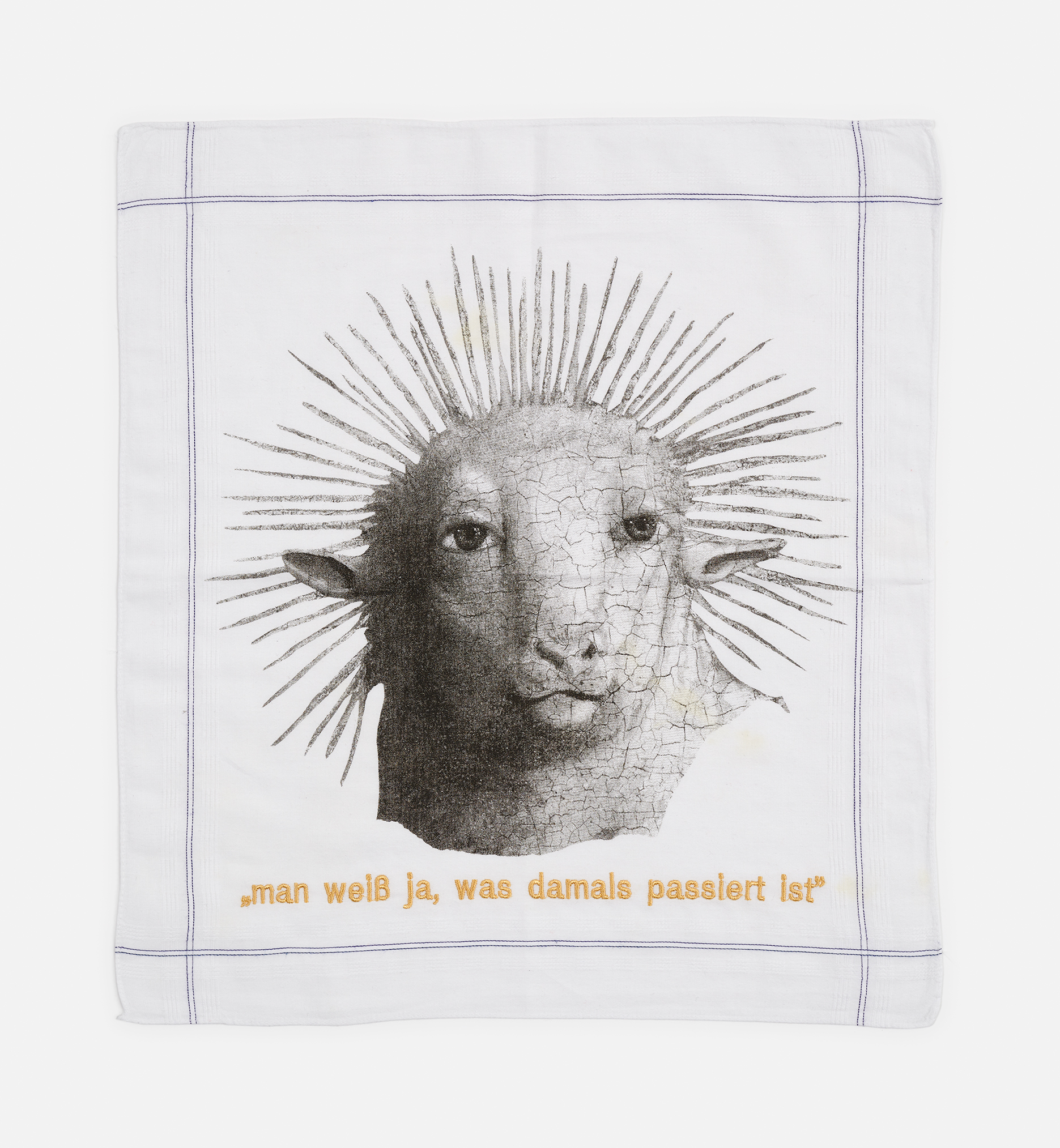 Marcel Odenbach’s annual edition for the Kölnischer Kunstverein is based on this year’s Vereinsgabe. The silkscreen prints on cotton handkerchiefs, which vary in size and color, are complemented by the sentence embroidered in gold “man weiß ja, was damals passiert ist” (you know what happened back then). The picture motif, the head of a lamb, stems from Odenbach’s fascination with the story about the recently completed restoration of the Ghent Altar by Jan and Hubert van Eyck (created between 1432 and 1435), after which it became clear that the original depiction of the lamb had been intended by the artist himself to be interpreted differently. Ecclesiastical censorship led over five centuries to the overpainting of the lamb, which can be considered a form of iconoclasm— the surprising thing is that it has human features and seems to interact with the viewer. Instead of the eyes of the lamb, Odenbach now added his own eyes. Finally, the choice of motif also has to do with his own biography: for example, he tells us that as a Cologne native he was greatly influenced by a city in which relics and above all the pictorial sources in the Catholic Church are overrepresented with the iconographic symbolism of the altarpieces. The print of the face on handkerchief is not only a reference to the Turin Shroud, another Catholic symbol, but also refers in particular to his earlier installation Alles Gute kommt von Oben from 2005, in which the portrait of the Ethiopian Emperor Haile Selassie was shown on 150 handkerchiefs laid out on the floor (presented in the exhibition Ethiopia and Germany in the GRASSI Museum of Ethnology, Leipzig and Goethe-Institut Addis Abeba, 2006). With this he reflected the appearance of the emperor, who liked to see himself as “Lord of the Lords” and let such cloths rain from the sky after feeding the poor.

Marcel Odenbach (*1953 in Cologne, lives ibid.) has been professor at the Düsseldorf Art Academy since 2010. He was recently awarded the Wolfgang-Hahn-Prize 2021 of the Society for Modern Art at the Museum Ludwig. His works have been shown in numerous important solo and group exhibitions since 1978. His most recent solo exhibitions include Kunsthalle Nürnberg, Fine Arts Museum, Ho Chi Minh City (both 2020), National Gallery of Modern Art, Mumbai (2018), Kunsthalle Wien (2017) and Tel Aviv Museum of Art (2016).