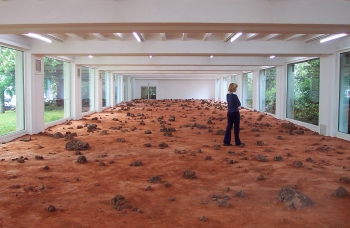 “As a sign of your solidarity with recent events in the world, we ask you not to interrupt the activity you are engaged in for the next minute.”

When visiting a group exhibition, museum-goers regularly heard this message. Apparently, a museum guard had put his radio on a station whose spokesman with an Eastern European accent had repeatedly interlaced Roman Ondák’s sentence in the current news.

To the museum visitors, the message entitled “Announcement” (2002) seemed like a sudden interruption of the museum’s everyday life. It was understood as an invitation to behave in a certain way and to become part of the exhibition itself through this performative act. This play with meaning, context and imagination is one of the central moments in Ondák’s artistic thinking.
Roman Ondák thereby develops a great intimacy with people who are involved in them as observers or actors.

For “Antinomads” (2000) Roman Ondák photographed friends, relatives and acquaintances who do not want to travel in their private surroundings. These photographs were reproduced as postcards and offered for free in exhibitions. Like all other postcards, they were purchased by tourists and sent all over the world. The “Antinomads” thus became world travellers in a paradoxical way, in that Ondák confronts the temporal and local standstill with a new option for action that combines both, local ties and mobility.

As a close observer of our reality, Ondák records his everyday perceptions in the form of drawings and notes, from which he develops his artistic interventions, which, through shifts in context and poetic-looking stagings, feed back into the real world. By means of a constant and contradictory transfer of meanings, the introduction of unexpected actors into a place full of expectations, or the repetition of the same image in different media, he adds a sensitively disturbing counterweight to our habitual balance of perceptual processes, thereby unmasking our laboriously balanced collective construction processes of content, meaning and the emotions associated with them. Roman Ondák works with a wide variety of artistic media, such as drawing, performance, sculpture and installation.

For his exhibition at the Kölnischer Kunstverein – Roman Ondák’s first major solo show – he is developing a sculptural in-situ work. Here too, an experiential space full of shifts, thresholds and unexpected outlooks is created. He juxtaposes reality with his own counter-concept of a world that becomes a poetic scene of secret, unpredictable, random behaviour and collective longings. The exhibition space takes on the materiality of a spatial object, which seems to be pushed into reality like a foreign body, but at the same time is inseparable from it.

A comprehensive monographic publication with works by Roman Ondák since the 1990s will be published for the first time to accompany the exhibition. The texts are by Georg Schöllhammer, Igor Zabel and Hans Ulrich Obrist in German and English.