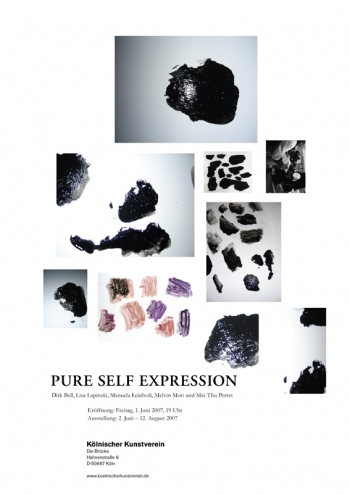 Pure Self Expression, announcement for the exhibition at the Kölnischer Kunstverein 2007

The artists Dirk Bell, Lisa Lapinski, Manuela Leinhoß, Melvin Moti and Mai-Thu Perret pursue in very different ways their interests in cultural phenomena committed to the unconscious. From time to time they come into a dazzling conflict with their own critical position and a rationalistic view of the world. The exhibition Pure Self Expression contains installations, sculptures and paintings revealing an affinity to trade and handicraft items. On this formal level the works of art pose the question of authorship, which is again challenged by the referential charging of the objects.

Since 1999, Mai-Thu Perret has been working on the fictional text The Crystal Frontier, a text about a group of women leaving the city in order to establish an autonomous commune in the desert. Banner, props, carpets or pottery emerge throughout the process, functional as much as inoperable objects, that are exhibited as objects of this anonymous group and are intended to reveal the psyche of this fictional group. The artist plays with the questions of authorship and describes herself so to speak as producer of a „Group material.“ For Pure Self Expression Perret produced two carpets and seven ceramic reliefs – two techniques connected with feminism and Hippie-culture. In contradiction to the rather cool appearance of the lacquered, monochrome reliefs, also the motives like eggs, chains, crystals and skulls speak for this ironic exaggeration.

Lisa Lapinski’s sculpture Nightstand is composed of piled up furniture, drawers, cabinet doors, lost items and photos. Lapinski’s pyramidal composition follows formally the drawings of arbor vitae of the religious Shaker Communities in the 19th century. The used objects are also based on the style of furniture typical for the Shaker Communities and regarded as the forerunner of modern design. The space installation named „Nightstand“ is no decorative bedroom accessory, but instead gives the impression of a bulky arrangement, neither sculpture nor furniture, which as a whole, in spite of the conceptual interconnection of historical motives, creates an almost eerie, sacral atmosphere in space.

Manuela Leinhoß’ sculptures are titled Zukunft beginnt noch nicht, Der Wille zur Lust, Forte oder Verhältnis ohne Gegenteil and reziprok are part of her playing with the incongruity of object, title and meaning. Her fragile objects made of hard plaster, leatherette, wood or paper seem to communicate with each other. She abandones perfection with precision, creates the impression of something home made and instable, thus setting herself deliberately into oeuvre. Personal experiences, texts of authors enter the titles of the works of art and enable possible associations for charging the formally reduced objects with a content, which, however, always remains ambiguous and indefinite.

Dirk Bells’ paintings, drawings and collages with their ephemeral formal appearance refer to role models such as the Symbolists, William Blake or the drawings of Leonardo da Vinci. They seem to appeal in an almost excessive degree to the old concept of art as a dream world. Bell deliberately aims at formal and substantial connotations that at first look like a faux pas. In the installation at the Kunstverein these are for example Kitsh motives from popular-culture, teenager-rooms, but also the supercharging effect of light. He arranges a small altar, next to painting, drawings and objects creating the idea of diverse narratives. By painting on found paintings he, too, poses the question of a subjective filter, which every reception represents.

The Film The Black Room by Melvin Moti combines a fictional interview with Robert Desnos about his experiments in automatic writing under self-hypnosis, done in the circle of Paris Surrealists in 1923, with a very slow tracking shot panning along the walls of the Roman Villa Agrippa near Pompeii. A place where grotesques were for the first time used as wall decoration. They represent the transformation from realistic illusion towards a new imaginary power and free representation of the world. The frescoes range from trompe l’oeil to magic. The question of how spiritual experience can be reconstructed and imparted is an important point of departure for Melvin Moti’s artistic work. In The Black Room imagination is shown as part of the psyche and the social reality, thus becoming a productive counterweight in times of fictionalization and virtualization.